Located in the west coast of Galicia. Its ría is the highest of the Rías Baixas (Lower Rías), in the region know as Death Coast (The Death Coast).

It is a transition ría, between the calmer ones in southern Galicia (Rias Baixas) and the wilder ones in the north (Rias Altas).

The County de Corcubion is among the smallest ones in Galiza, with an extensión of 7,2 Km2 and around 2000 inhabitants. It is made of two parishes: San Marcos de Corcubion and San Pedro de Redonda.

The origin of our village is not very well known. But the prerroman place name indicates the area was populated long time ago.

Castro of Quenxe, which lies on top of the hill with the samen name, is one of the examples of castro culture traces in the area.

The name Corcubion might come from a celt language or from the old galician-portuguese. Corcu or Corco, meaning "circle" and -bión/-beón, meaning "lake" will join to form Corcubion.

The Port of Corcubion has been very important since ancient times. The classical chroniclers mention that the population greco-romans of the region belonged to the tribe protocelta of the nerios.

If the Romans arrived to Fisterra (Finis Terrae) where situated the Ara Solis, can not surprise the apparition of traces that give faith of the roman presence in Corcubion, for being his inlet the most protected place and natural port of the Ria. 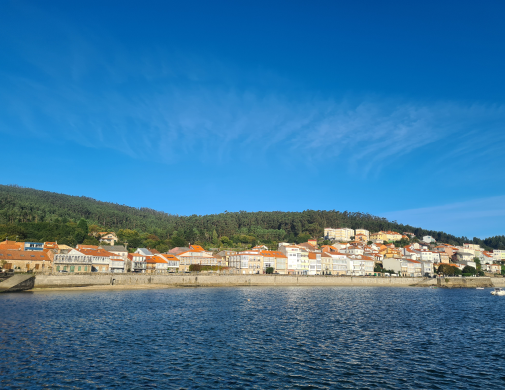